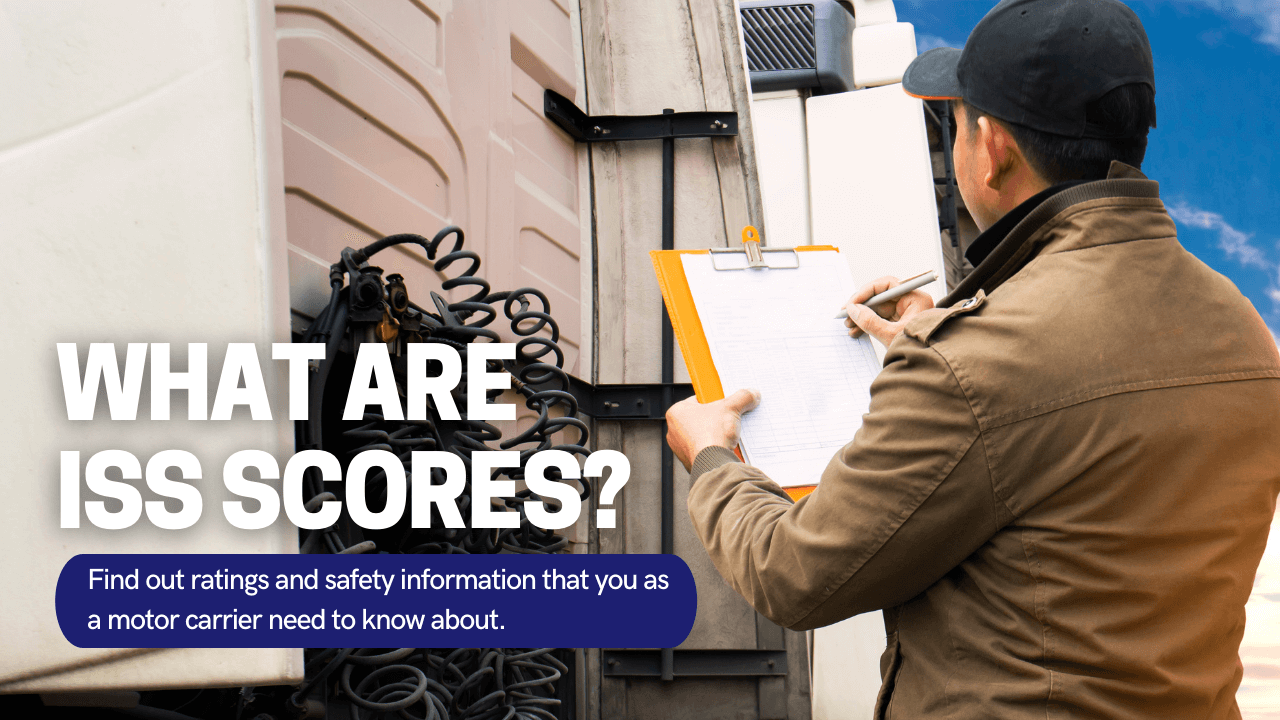 ISS Score for Truckers Explained and How to Find it

Oftentimes, the ISS score gets mixed up with the carrier’s CSA score. Although there is a relationship between them, they are different from each other.

CSA scores are measurements for a given carrier to aid in the truck inspection screening and are considered the primary means to which the FMCSA identifies high-risk motor carriers. On the other hand, the Inspection Selection System (ISS) is a tool that roadside inspectors use to help determine which vehicles will be selected to stop for inspections. Your ISS score is tied with your DOT number and is commonly used at fixed weigh station sites where officers can get your score quickly from your system. It is also frequently used to make weigh station bypass decisions.

How is my ISS Score calculated?

Per Federal Motor Carrier Association (FMCSA), the ISS score is calculated from a carrier’s Behavior Analysis and Safety Improvement Categories (BASICs) percentile values, as recorded in the FMCSA’s CSA Safety Measurement System (SMS). This scoring method is simply a way to gather up all the BASIC values into a single, at-a-glance score.

If you operate under a new authority, you may not have enough history from which to accumulate a BASIC score. In that case, the ISS score is determined through the use of an ‘Insufficient Data Algorithm’, which is used until there is enough data to bring the carrier into the BASIC safety measurement system. If that is the case, you are more likely to be inspected.

Here is a link that shows a very in-depth breakdown of how these scores are calculated. https://ai.fmcsa.dot.gov/sms/helpfiles/iss_algorithm.pdf

What determines your ISS Inspection Value?

The overall inspection rating can go from 0 to 100 – the lower the better. Basically, a formula has been created for pulling info from a motor carrier’s safety record for the following:

The ISS ratings are split into three categories:

The goal is to have a low score. ISS scores can determine how often you will get inspected. Although some roadside inspections are based on random selection, most will be as a result of a higher ISS score. For carriers who earned “Inspect” or “Optional” ratings, they’ll more likely to be inspected.

How to find your ISS Score?

You can find your ISS score by logging into your FMCSA’s carrier profile. The website can be accessed through this link. If you haven’t set up your account yet, use this link instead to create your account.

Once you’re logged in, you will see the “Company Information” section on the main page. Next, click the blue button labeled “Inspection Selection System (ISS) Info”. It will now display your company’s ISS score, the resulting ISS Recommendation, and the Basis for Recommendation – which is essentially the criteria an officer would follow when determining whether or not to inspect a truck that has already pulled in.

Once a truck is being pulled in, it is now up to the officer’s discretion, using the ISS score system and many other criteria, as to whether or not an inspection should take place.

A bypass service and the FMCSA’s manipulation of ISS scores make for a self-regulating system. Carriers should not worry if bypassing scales might harm their ISS scores and that they no longer need to choose as to whether to use a bypass service or not. Those who participate in a bypass program will still be able to enjoy bypasses that reflect their safety scores. If the FMCSA data model finds it necessary, their ISS scores will temporarily be increased for some trucks to be inspected, and then get their good safety scores will be confirmed and reinstated.

It is also important to note that all states set a random pull-in rate for all vehicles, which means that occasional pull-ins may be given to even the most pristine carriers.

Why you want to keep your ISS Score low

Remember, the goal should be to have a low ISS score. A high ISS score means you are considered a ‘red light’ and may be required for regular pull-ins. The higher your score is, the more likely you are to be prioritized for an inspection. In the majority of cases, a low ISS score is ‘green light’ and in rare times that you’ll be randomly selected to pull in, a low ISS score will be beneficial. If two or more trucks are at the same scale, the officer may likely be more inclined to inspect the truck with a higher score over the one with the lower score.

Having a low ISS score is one way to show law enforcement that you are serious about your fleet’s safety and more importantly, it suggests you’re a safe carrier and you are doing your best to contribute to the overall effort to make our highways safer. That’s why we strongly advise that you monitor your ISS scores monthly or quarterly at a minimum.

As always, our team at DOK Insurance Agency is here to help where we can. Please feel free to email info@dokagency.com, chat with us live, or give us a call at (425) 242-5252.